Sinharaja rain forest reserve the best kept secret in Asia, is one of the least disturbed and biologically unique lowland rain forests in Sri Lanka. This rain forest covers an extent of about 11187 hectares from east to west of Sri Lanka. The length of the Rain forest is about 21km and width from North to South is about 3.7km. It was declared a National wilderness area in 1988 and lately a world heritage site in 1989. Sri Lanka has 07 world heritage sites. It is situated in the southwest lowland wet zone of Sri Lanka in the districts of Ratnapura, Galle and Matara. The average annual temperature of Sinharaja is 23.6 C. Rainfall figures show values ranging from 3,700 to 5,000 in and around the Sinharaja forest. Average height of the trees varies between 35m – 40m.some individuals rise even up to 50m.The vegetation of Sinharaja forest is evergreen forest type with a high degree of endemism. In fact some families show an endemism more than 90%. The untapped genetic potential of Sinharaja flora is enormous.

Out of the 211 woody trees so far identified within the reserve 139 (66%) are endemic. Similarly, high levels of endemism are perhaps true for the lower plants like ferns, epiphytes as well. Out of 25 general endemic to Sri Lanka 13 are represent in Sinharaja forest.

tudies on the fauna of Sinharaja have revealed that there is a high degree of endemism among the butterflies, fish, amphibians, reptiles, birds and mammals are greater than 50%.The most common deer species is the Sambhur, The Monk deer and Barking deer are also found within the reserve. Leopards are very seldom sighted, but their frequent presence has been confirmed by tracks and other signs.

Out of the birds recorded in the western sector of the reserve, 72% were resident non-endemic and 13% migrant. The rare endemic birds to be seen in Sinharaja are the Red-faced Malkoha, the Sri Lanka Blue Magpie, the Ashy-headed Barbbler, and the White - headed Starling and the Green – billed Coucal the rarest of Sri Lankan birds. 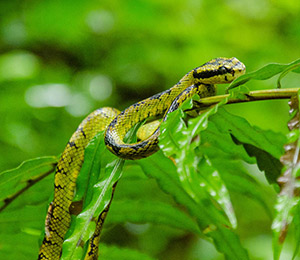 Among the snakes the green Pit Viper and Hump-nosed Viper are commonly found in this forest and are endemic to Sri Lanka. The amphibians are fairly well represented in the reserve and nine endemic species have been identified.

The below mentioned table of 262 vertebrate species has been complied which includes 60 species endemic to Sri Lanka. This gives an analysis of the fauna of Sinharaja forest in relation to the total fauna of the Island. From this Table it is evident that there is a high degree of representation of Sri Lanka fauna, particularly endemic species at Sinharaja Forest. At the moment, this check-list is the only one all the major vertebrate groups found in a single location