Sigiriya, in fact, should have been classed as one of the Wonders of the Ancient World, long ago, and there is now a proposal to name it as the Eighth Wonder of the world. Perhaps, it is better late than never! 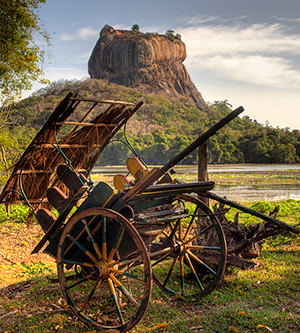 Sri Lanka's ancient architectural tradition is well portrayed at Sigiriya, the best preserved city centre in Asia from the first millennium, with its combination of buildings and gardens with their trees, pathways, water gardens, the fusion of symmetrical and asymmetrical elements, use of varying levels and of axial and radial planning. Sophisticated city planning was at the heart of Sigiriya, this royal citadel of ancient fame from the days of Sri Lanka's memorable past.

The Complex consists of the central rock, rising 200 meters above the surrounding plain, and the two rectangular precincts on the east (90 hectares) and the west (40 hectares), surrounded by two moats and three ramparts.

The plan of the city is based on a precise square module. The layout extends outwards from co-ordinates at the centre of the palace complex at the summit, with the eastern and western axis directly aligned to it. The water garden, moats and ramparts are based on an 'echo plan' duplicating the layout and design on either side. This city still displays its skeletal layout and its significant features. 3 km from east to west and 1 km from north to south it displays the grandeur and complexity of urban-planning in 5th century Sri Lanka. 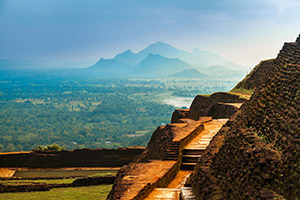 he most significant feature of the Rock would have been the Lion staircase leading to the palace garden on the summit. Based on the ideas described in some of the graffiti, this Lion staircase could be visualised as a gigantic figure towering majestically against the granite cliff, facing north, bright coloured, and awe-inspiring. Through the open mouth of the Lion had led the covered staircase built of bricks and timber and a tiled roof. All that remains now are the two colossal paws and a mass of brick masonry that surround the ancient limestone steps and the cuts and groves on the rock face give an idea of the size and shape of the lion figure.