The ruins of Anuradhapura are one of South Asia’s most evocative sights. The sprawling complex contains a rich collection of archaeological and architectural wonders: enormous dagobas, soaring brick towers, ancient pools and crumbling temples, built during Anuradhapura’s thousand years of rule over Sri Lanka.

Today Anuradhapura is a rather pleasant albeit sprawling city. Mature trees shade the main guesthouse areas, and the main street is orderly compared to the ugly concrete agglomerations seen in many other regional centres.

From the 4th century BC, it was the capital of Sri Lanka until the beginning of the 11th century AD. During this period it remained one of the most stable and durable centers of political power and urban life in South Asia. The ancient city, considered sacred to the Buddhist world, is today surrounded by monasteries covering an area of over sixteen square miles 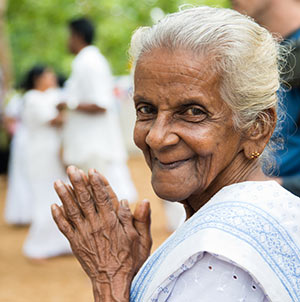 GemsLocated in the North-Central part of the island. The pre-Christian capital is a stately metropolis of striking monuments, parks and irrigation lakes, which was originally founded by the minister named Anuradha in 500 BC. The 2250 year-old Sacred Bo Tree(ficuss riligiosa), grown from a sapling obtained from the tree, under which the Buddha was meditating and attained enlightenment, is the oldest living tree in documented history in the world. Ruwanweli ( 161-137 BC ) , Abhayagiri (103-77 BC ), Jethawana ( 247-301 AD ) Dagabas ( dome-shaped massive Buddhist relic shrines), are classed after Egypt's Great Pyramids as the world's most massive ancient monuments. This ancient city has served as the royal capital of 113 kings. It was fought over and finally abandoned in 1073 when the capital was moved to Polonnaruwa. In the 19th century, the "lost" city was rediscovered by the British explorers and restoration and rebuilding the city has since begun. Anuradhapura is a living pilgrims site, which attracts thousands of visitors and pilgrims.