Nuwara Eliya, Sri Lanka's premier hill-resort is renown for its cool, invigorating climate and is picturesquely located on the shores of Lake Gregory 6187ft.(1892m) above the sea level, in a prime tea-growing district. 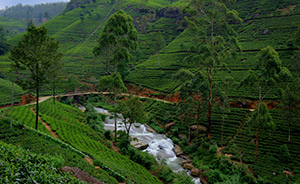 Set up and developed as an English village and health resort by 19th century British colonial settlers, its older buildings such as the post office, Holy Trinity Church, The Grand Hotel, The Hill Club, vintage hotels and houses and the Golf Club have old English architecture, pretty flower-gardens and great nostalgic charm. The Victoria Park is at its best from January to April, when it is blazed with "English Garden" flowers. Sri Lanka's highest mountain Piduruthalagala (8282 feet) is located here. Nuwara Eliy also has one of the finest 18 holes Golf Course in south Asia. 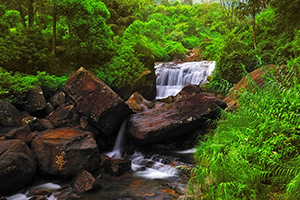 The city was founded by non other than illustrious Samuel Baker,the legendary discoverer of Lake Albert and the explorer of the Nile in 1846. Such was the salubrious climate that in no time Nuwara Eliya became the prime sanctuary of the British civil servants and planters in Ceylon. Nuwara Eliya, called Little England then, was also the ideal hill country retreat where the British colonialists could immerse in their pastimes such as fox hunting, deer hunting,elephant hunting, polo, golf and cricket.

Many of the buildings retain features from the colonial period such as the Queen's Cottage, General's House, Grand Hotel, Hill Club, Town Post Office and even new hotels are often built and furnished in the colonial style. Anyone who visits the city can wallow in its nostalgia of bygone days by visiting these landmark buildings. Many private homes still maintain their old English-style lawns and gardens.