Heading towards Wellawaya you’ll pass the 171m-high Diyaluma Falls, Sri Lanka’s third-highest waterfall, just 5km beyond the town of Koslanda. Cascading down an escarpment of the Koslanda Plateau, The falls leap over a cliff face and fall in one clear drop to a pool below. 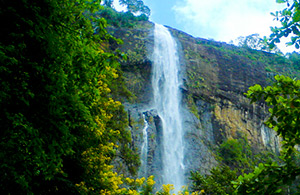 In Sinhalese, Diyaluma or Diya Haluma means "Rapid flow of water". According to Dr.R.L. Brohier, the famous historian, Diyaluma is the setting of the folklore about a tragedy involving a young King and a young woman of a low-caste